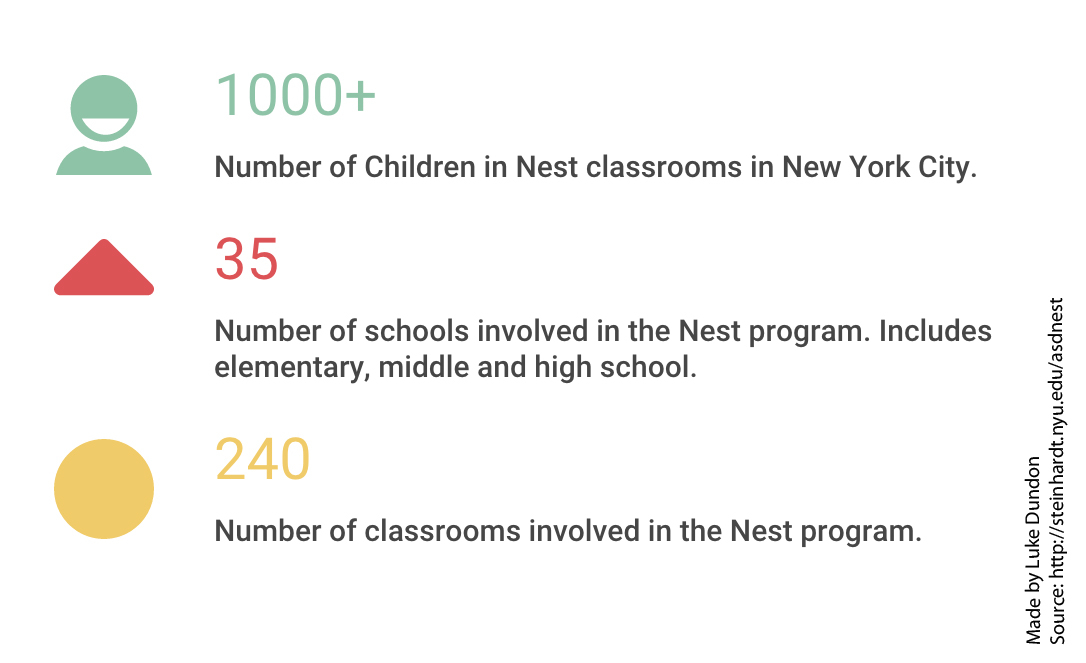 For a long time, children with Autism Spectrum Disorder have unfortunately been a challenge for schools. Schools around the world have introduced various methods of ensuring that their students with autism are able to access the same level of education as any typical child.

Recently, schools have begun focusing on integrating children with the neurodevelopment disorder into the classroom with other regular children. Around the world from Australia to Sweden, classrooms generally include one or two children with autism. Nevertheless these instances have not been achieved through a trialled system. They have proceeded without a streamlined means of ensuring that these children’s needs are being met.

Except for in New York City.
Over the last decade a system called the Nest model has been trialed in New York. Now, twelve years since its inception in Brooklyn, the model includes 1000 children, in over 240 classrooms in 35 different schools around New York City.

Though since 2003, the Nest model has been contained to New York, never being exported to a classroom in any other country. That is, until now.

Next year, Denmark will begin implementing the Nest program in Aarhus, its second largest city in eastern Jutland. A first for Scandinavia and Europe, the system will be introduced into one primary school, Katrinebjergskolen, initiating two Nest classes in August 2016.

The school so far has over 20 children whom it has identified as being on the autism spectrum. These children are currently spread throughout 13 mixed classrooms, ranging from the first to the final year.

“We haven’t always been exactly sure of what these children need or whether we are doing the right thing,” says Mr Christian Hellum, Principle of Katrinebjergskolen.

Principle Hellum recognizes that in order to support the children with autism, “we cannot ask them to change, the things around them need to change, it is up to the grown ups”.

“Like a box of rubber bands, we have all the things we need to make the ball, to make the structure, we just need to do it.”

The new grade-0 classrooms will include 12 typical students, two teachers and four children with autism spectrum disorder. That way, as Principle Hellum explained, teachers can work together with the whole class or even split it, depending on the circumstances.

Stockholm based psychologist Eva Billstedt emphasized the need for a system such as this, saying that even though in Sweden “there is a certain ideology to include everyone in school,” it is not a formal practice.

According to Principle Hellum, the parents of children with autism whom attend Katrinebjergskolen have been quite supportive of the initiative, as have those with non-autistic children.

“They are excited that such a small class will be allocated two teachers, it is a very good thing,” says Principle Hellum.

Principle Hellum also said that it would be impossible to fund the system purely from the schools existing budget. He outlined that the school had resorted to seeking external funding to launch the program.

Denmark’s Pedagogical Psychological Counseling organization, also known as PPR is working with Katrinebjergskolen to fund the project. They will be receiving funding from both the Aarhus Municipal Council as well as the Egmont group.

The Aarhus Municipal Council’s Bünyamin Simsek said that “the Nest schools will be supported by our central department and we will closely watch the implementation of the project.”

Mr Simsek noted that the aim of the Council was to support the needs of the professionals who are “developing the children”.

According to Principle Hellum, this support is coming mostly in financial form.

Chairperson of the Children and Youth Committee at the Aarhus Municipal Council, Maria Sloth, said that the Council had been following the project since it began.

“We supported the school with its study trip to New York City, to see the schools and talk to the teachers,” said Council member Sloth.

The trip she speaks about took place in September this year, when teachers, therapists and administrators travelled to New York City for training and school observations. The team from Aarhus spent most of their time observing classes at PS 112 in Harlem, one of the longest running Nest schools in New York City.

This was one of the first times “that autistic children had been integrated into the classroom so systematically. And it was and still is a success,” said Council member Sloth.

How it will be implemented

Teachers and researchers at Katrinebjergskolen have worked together to plan just how to introduce the system into the school. Even researchers and support staff from the Nest trial in New York flew to Aarhus in October to hold information sessions and planning meetings on the upcoming implementation of the Nest program.

Principle Hellum explained that starting in August 2016, two grade-0 classes would accommodate four children with autism each. The autistic children would be chosen by PPR while the school itself would select the non-autistic children.

For the next eight months until August, the teachers involved will be receiving monthly training from the New York based team who lead the original project. From New York University’s Steinhardt School of Culture, Education and Human Development, the researchers and teachers who worked on the project for 12 years have been discussing strategies with the teachers all the way in Aarhus.

“They’ve shared strategies such as the quiet corner, which is not so much a punishment, instead it is a space that children can decide to go to if they need to,” said Principle Hellum, pointing to a partitioned square in the back of a classroom.

Autism researcher Marianne Banner from Landsforeningen Autisme Aarhus said “strategies such as this help the child to make their own decisions and progress socially.”

As well, the school has adopted visual learning strategies that include placing pictures and words all over the walls. Principle Hellum claims that the images and texts are strategically chosen, so that information such as the schedule for the day, the class values and the ‘way to ask a question’ are easily accessible and also do not require the teacher to constantly have to explain them.

He claims that even though the Nest system has not technically been put in place, small additions to the classroom like this one are already helping.

“It has already proven to be an effective technique for both autistic children and the normal children, which is very good,” said Principle Hellum.

The reasons for the Nest trial

According to Eva Billstedt, both Danish and Swedish autism experts have agreed for a while that children with autism and those without it should be integrated into the same classrooms so as to build each other’s social capabilities.

However after looking at statistics gathered by the Swedish National Agency for Education, she realised that it was in fact the opposite.

“There had been a small increase for the last years,” suggesting that Sweden as well, is in need of a formal system of integration.

Therefore it is clear just how close an eye autism experts from Denmark, Sweden and the rest of Europe will be keeping on Aarhus and its progress with the Nest trial.